LOB is a medium-sized company whose many years of experience – combined with the most modern production technology – offers a wide and innovative range of products. Thus LOB has firmly established itself in the market for apparatus and tank construction and supplies many well-known customers from the chemical and petrochemical industry as well as plant engineering. In addition to the manufacture of apparatus and vessels, LOB also offers planning and assembly, thermotechnical calculation and structural design as well as apparatus and structural engineering. We have combined these services in the LOB Engineering division.

One focus in this new area is on heat transfer systems in panel design. Due to numerous applications and 30 years of experience, LOB has extensive knowledge in this field. In our two production facilities, apparatuses up to 60,000 kg in weight can be manufactured. The maximum dimensions are length 40 m, width 6.0 m, height 4.5 m with a diameter of 4.5 m. Even larger apparatuses or plants are assembled by our employees directly at your site. Our current product range is shown in the following overview: 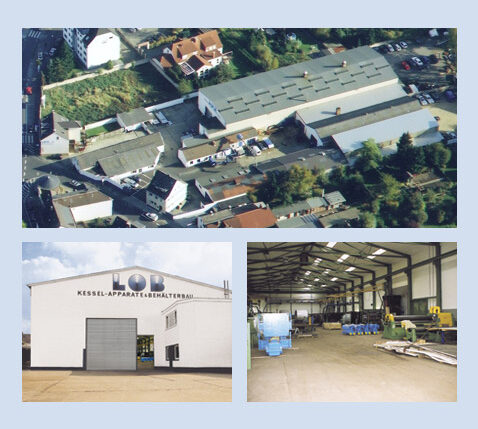 LOB – behind it stands a traditional family business, which has been in existence since 1924, now in its fourth generation. In the first few years after its foundation by Wilhelm Lob, the company initially dealt with locksmith and steel construction work. In the course of the decades the range of products has been continuously expanded: In 1948 LOB was co-founder of the association of heating boilers and has been manufacturing heat exchangers and boilers ever since. Storage tanks were added in the mid-1950s; since the 1960s, vehicle tanks for liquid and powdery goods have also been built. Parallel to this, chemical apparatus engineering developed as the most important field of activity today.

Today, LOB is a medium-sized company whose many years of experience – combined with state-of-the-art production technology – offers a broad and innovative product range. LOB has thus firmly established itself in the market for apparatus and tank construction and supplies well-known customers from the chemical, consumer goods, food, mechanical and plant engineering industries as well as government institutions.